End of the third day in Kona

Living the high life here! We found a deck of old style Skipbo cards in the condo during our cleaning, so I asked Mom if she'd like to play. She agreed, and despite not having played in years (maybe a decade), she kicked my butt. Which I will admit is a bit frustrating, since I KEEP HAVING MY BUTT KICKED AT HOME, TOO.

I swear, my Skipbo mojo is weak. 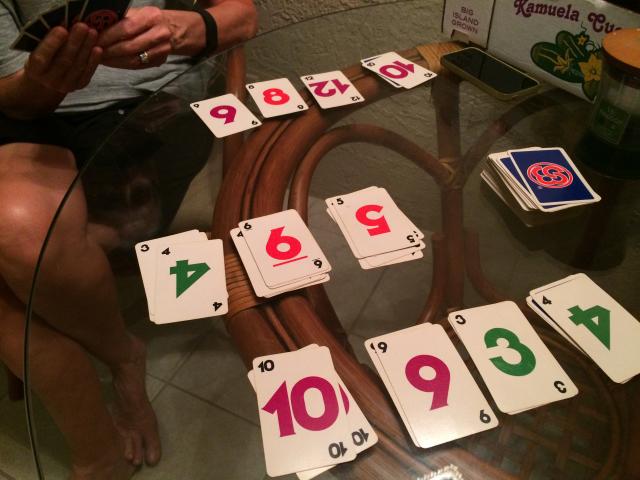 Instead of staying in the City today, I decided to head out to look at the house. Having not been able to visit the house in the last few weeks since the tenants l'horrible moved out, I've been worried about the condition of the house. Dad says he's been over to look at it, but he didn't do much other than verify the heat was on. I was hoping to see Dad this weekend, too, but he's out at Chris' house (which cracked me up, that we're going to completely miss each other).

I had made this decision before I had realized there was a wedding brunch this morning. I met up with Lea in the lobby, where she offered to drive us to the brunch. I declined, since I already had made arrangements with Jess to hang out with her this afternoon and evening, but took her up on her offer to take me to the train station.

See, I was carrying the base of the wedding cake: a wood disc about 24" in diameter. Outside, the weather was windy and snowing and windy and blustery and did I mention the winds? Imagine how perfectly a 24" disc of wood becomes a sail in high velocity winds, and you can see just why I preferred a car ride with Ken and Lea to becoming a kite on the way to the train station.

Somehow I made across the street from where Ken and Lea dropped me off, dropping the disc a few times and running after it as it rolled down the street. If Ken wasn't laughing hysterically at my antics, then he has no appreciation for physical comedy.

An hour and a half of trains, followed by more delay because I chose the bad car rental agency again (made better only by the fact that I knew where I was going this time), a couple hours of driving the speed limit or more slowly, through (did I mention the) bad weather, and I was finally back in familiar country.

I can't say that driving in this weather is particularly comforting to me. I know the basics of driving in bad weather and snow and ice and dark and other various hazardous driving conditions (including the safest way to drive in these conditions, which is to say, don't drive in them), but, hey, I did okay, arriving at the house, checking it out, then heading over to Jessica's to stay the night with her and Gab.

I was immediately greated in Jess' dog's neurotic style which is to run up really fast, sniff my leg, then run away just as fast, as I'm determined to be a Stranger™ and Dangerous™ Jessica laughed at the dog (her laugher is always great to hear, I don't think she laughs enough), knowing full well that I would win the dog over before I leave tomorrow.

Jessica, bless her heart, immediately suggested we head over to Panera.

I have to say, I really (as in, really really) like Panera. It seems each time I head out to Indiana, I have at least one meal at Panera every day. If the people working there stayed longer than a month (they might), and see me on my visits, I suspect they'd be weirded out by my binging behaviour.

Gabby joined us later, and the three of us went home to play a rousing game of Skipbo!

Gabby let me know that I take too many pictures, so I handed her my camera for one of those elusive shots that is rarely seen on my camera.