Today was the first full day of Oliphest 2016, the first annual Oliphant Festival. Originally conceived as a pottery-and-book exchange gathering of friends in Portland, other elements quickly emerged (such as the desire to have a conferences completely full of the hallway conversations that are "the best part" of larger conferences). Everyone quickly volunteered different events to have, and soon we realized we had our conference. The schedule is fluid, with a few fixed by external factors, such as another conference held in Portland the same weekend (which is to say, XOXO).

First up on the Oliphest schedule was waffles. I've been on a huge waffle kick, ever since having Saturday morning breakfast over at Shirley, Chris, and Penelope's house. Shirley has an adorable waffle maker, which I just lurve. It's smaller and easier to wield than my farm animals waffle maker (which I also simply lurrrrve), and so, more likely to be pulled out for quick meals. 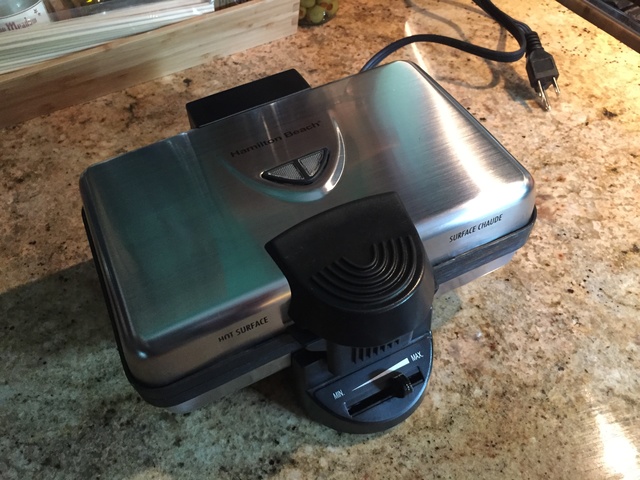 Breakfast in the woods

Kris and I dashed up to Mike and Kate's for breakfast this morning (where dash means "show up 40 minutes late"). Of course, I forgot my camera in the car when Kris and I went in. Kris hasn't been up to the house very much, so when he walked in, Liza was quite surprised. She looked up at him, put one hand on a hip, and announced, "I usually see just Kitt here."

Kris managed not to laugh.

Katie and Alex were up at the house, too. He and Maeryn played well together, though spending time with Liza means Maeryn behaves older than any other kid her age.

I managed to make pumpkin waffles again, this time with nutmeg instead of cinnamon, in deference to Mike. They were still tasty. I swear, that waffle iron (thanks Bharat and Jen!) is getting more use than any other appliance I own.

Except maybe the dish washer.

This morning, we had the Orange Meal, Part 2. We invited Andy over for pumpkin waffles before the usual dog Saturday morning dog hike. He walked in with a huge weighted bag, a hefty machine and the question, "Have you ever had carrot juice?"

While I was mixing the waffle ingredients together, Andy washed the carrots and oranges and started juicing them in the juicer he had brought over.

I was surprised at the amount of pulp that came out of carrots. I can't say I had ever considered carrots for their pulp or fiber, though I realize they have a lot of both. More in retrospect I realize this.

Andy also juiced a bunch of oranges. He suggested we mix them. Although the carrot juice was quite tasty, the orange juice mixed in sweetened it a bit, making it REALLY tasty.

Though, if you let it sit too long, the various parts separated. A good swirl and they were all remixed and just as tasty.

Eventually, the waffles were done. The recipe we're using makes enough batter for 20 waffles, which is twice the batter most of the recipes I usually use. Our waffle maker (Thanks Jen and Bharat!) hasn't failed to entertain any waffle guest, as it makes barnyard shaped waffles: cow, barn, pig and chicken (maybe a rooster). I never quite put enough batter in the barn well, though, causing my barns to be blocks on sticks. I'll get it eventually, though.

Because we have so many waffles, we're able to share with all house guests. Even the small(ish), furry ones.

After breakfast, Andy installed the programmable thermostat Mark and Megan had given us LAST winter. Nothing like losing an item on the task list. Fortunately, I knew what box to look in, and Andy was able to actually find the thermostat (and instructions!). When he was done, he even checked our furnance filter.

Did I mention how much we love Andy?