I emailed Megan yesterday asking her, hey, up for lunch or errands or something? She emailed me back, then texted me that she was over in a local park today, hey, did I want to hang out. Hecks, yes, I thought, grabbing my late lunch and heading over.

The park is around the freeway from the house, so an easy drive over. It took me longer to find her and the kids at the park than it did to drive over. It's a good thing that Merrick was crying, else I'd never find them. I had called Megan on the phone to see where they were, and heard Merrick over the phone. When I hung up, I paused to listen for his cries, then followed them to find the four of them.

For the record, that boy has some serious lungs. 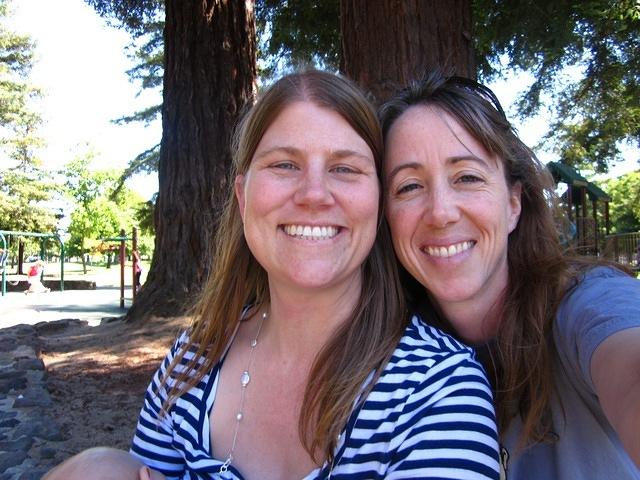 The girls went off and just started climbing. They were super cute as they just jumped onto the bars and went go go go! This was just the best thing EVER. Meter was a little confused at first, "We've been here before," but Mirabelle was *all* *over the place. It was fun to watch them run around while Megan and I chatted. 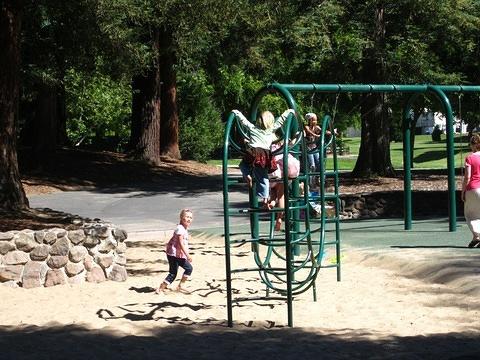 We followed Meter and Mirabelle around the playground, stopping at one point when the girls seemed to find bars they liked. Soon into the new jungle gym, Mirabelle reached up and grabbed the two handles hanging from two bars. It was a set up where you grab the handles on two sliding rails, and push off from the one side and slide down the rails to the platform on the other side.

Mirabelle decided to skip the handles, and monkeyed her way across the bars hand over hand, and darn quickly. I was impressed, thinking, "Daaaaaaaang, that's some good parenting by Mark and Megan, their girls are fearless."

Meter was a little shorter, so she motioned for me to pull the handles over. I pushed them over to Meter and stepped away. Meter was just an inch too short to reach the handles, so started motioning me to lift her up. After being encouraged to use her words by Megan, I lifted her up, so that she was hanging from the handles. 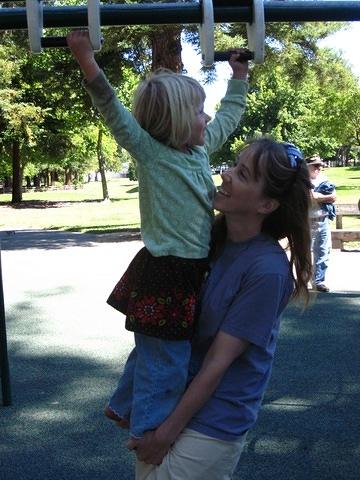 Nope, that wasn't quite correct either. She didn't have the strength to walk herself over, so I held her up just slightly, eventually moving to holding her feet up, and she "walked" her way across the rails.

Seriously now, playing on the bars? Sounded like so much fun!

When Meter stepped down from the platform and let the handles go, and another girl who was on the platform stepped away, I jumped up and grabbed the handles. As I pushed them, I realized there was some friction on the rails, so, if I were to push myself all the way across, I'd have to push hard.

So, I grabbed the handles and pushed hard.

See, the thing I forgot when I pushed hard, was that if I'm flinging my legs around from below me to in front of me, there's a lot of downward force on my hands. My legs flung down and around, and as I started moving towards the other platform, I had a moment of confusion.

The world turned 90° and I saw trees.

Then then I landed.

Turns out, I had let go of the handles, my feet flew up, and I landed on my upper back, head and neck.

As I lay there I was thinking, "Huh, I'm forgetting something."

And I heard a woman's voice, "You okay?"

No one touched me, I noted.

And I was still forgetting something.

I heard Megan's voice over me, "You okay? Did you get the wind knocked out of you?"

That's it! I hadn't been breathing!

I inhaled. Well, I tried to inhale. It took a couple tries before I managed that. When I did, the first thing I did with my first exhale was to burst out laughing.

Holy crap, seriously, if I had a video of what I had just done, I'm 100% sure I'd watch it on infinite repeat and laugh hysterically. It would have to be one of the finest examples of physical comedy I'd ever see. Wow.

I gave the thumbs up to the guy who was standing near me. I let them know I was okay, and was just laughing. God, that hurt, but mostly in a whiplash sort of way. Megan is probably used to her kids having all sorts of crashes and accidents and was completely non-phased.

Once I stood, my left arm went numb, and I started seeing spots. I had a whiplash-induced migraine six / seven years ago, so I worried about the spots enough to drive home immediately, making it safely. My neck is sore, by ego / pride is completely bruised, but, yeah, it was funny falling from four and a half feet up.

A re-enactment of my landing: 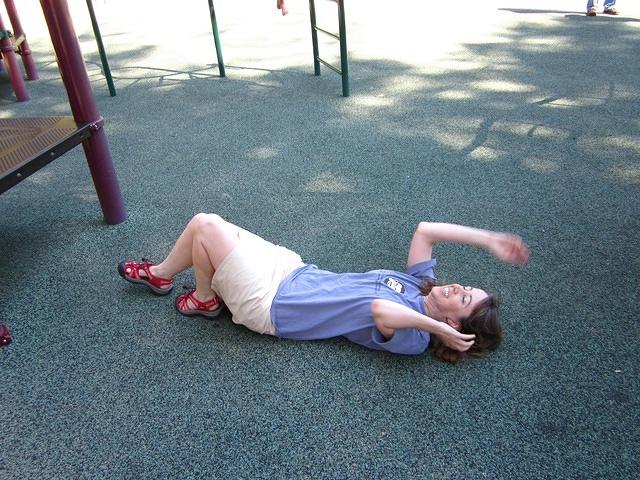 And, yeah, that "letting go" thing?