As I was working this morning, I heard a squawk and looked up to see a flutter of a bird panicking in my living room.

... right into the kitchen window.

I pulled up my phone, called Mom, and declared, "I have a bird in my house."

At this point, Eric piped up, "Open the windows, close the curtains, darken any space you don't want it to fly into, and it'll find the light."

And Mom continued, "And take a video. Post it to the internet. Tell everyone you have a bird in your house."

I wasn't even sure if the bird was still alive at this point. 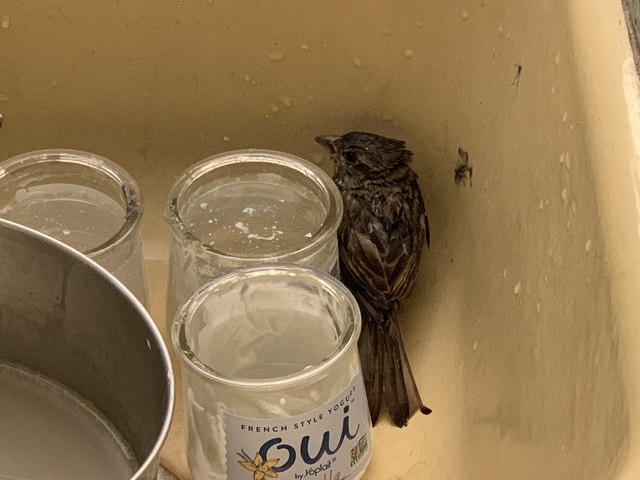 It didn't initially fly out of the house, it jumped a couple times up, trying to escape the sink. I was worried it had broken a wing when it didn't immediately fly out of the open window right above it (admittedly, it had just flown INTO said window when it was closed, so maybe it didn't want to go that way).

Eventually, it hopped up onto the counter, along it behind the counter items, onto the floor and out the door. I watched it until

Mom REALLY loves how it bounced along until it could fly off. . (Said linked gif is 35M, btw.)