I really need to learn more about geology, especially of the areas I'm visiting. The ground and mountains and soil around here is amazing. I just don't know enough to be incredibly impressed, as it is, I am only incredibly amazed and enjoying the views.

Today's plan was "travel by four-wheel drive up to the Cayambe Hut. From here we hike for an hour up to the glacier for a climbing skills review and to acclimatize. That evening we return to the Yanacocha Lodge for dinner." Best laid plans, first contact, blah blah blah, you know how this story goes.

The roadwork around here is "very old." Which is to say, many of the roads around here are small to medium sized rocks from the surrounding area, all laid into a road. The sheer amount of human effort to build these roads is mind boggling. I mean, we can say the numbers, but to fully understand the people, hours, and effort, nah, most people don't comprehend these numbers. We don't understand scale very well for the most part.

So, the roads are cobbled rock roads, but not all of the roads are actually cobbled, though. Many are dirt, some hard packed, some, uh, not so hard packed. We had rains the last couple days, so we are unsure what to expect, but are told, "We may need to push the trucks."

Worrying, and the roads are really bumpy. Like, if none of us have whiplash or sore necks at the end of this driving, I'll be amazed. I have to wonder if this isn't what riding a bucking bronco feels like.

Fortunately, I didn't have to wait too long. We hadn't driven very far before we were stopped behind trucks working on the road. A couple trucks were pickups, but a dirt mover was active a bit up the road. Our driver took the opportunity to chat with one of the workers. Thankfully, we have a couple climbers in our group fluent in Spanish, so when we are not with the guides, we still have translators. One of the road workers, said there are three areas churned up, muddy and unpassable. The drivers said, nope, we would make it.

We got stuck in the mud in the second churn. 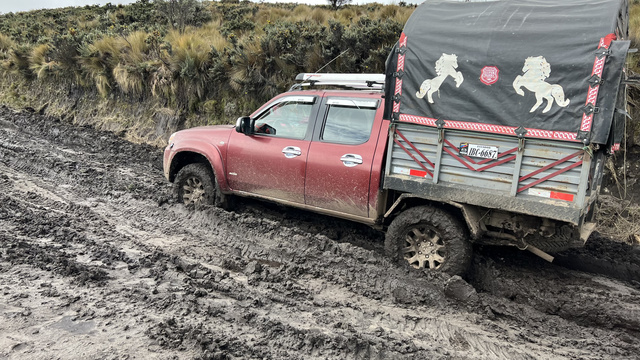 We have four trucks going up: two covered pick ups and two SUVs. I was in the first truck going up. The road was dark mud with deep ruts. The ruts were so deep that the bottom of the trucks would be in the mud between the ruts.

So, we all exited the trucks, they backed up a bit, and the drivers went to work. They lowered the middle hump, and started breaking branches from the bushes on the side of the road to throw into the ruts for traction. We could wait in the trucks, or we could help.

We broke off branches, carried them up to the ruts, handed them to the guides and drivers, and repeated until slowly one, then a second truck made the trip through the mud. We kept going, more branches, more traction.

We tore up a lot of branches for traction in the mud. I was so many levels of uncomfortable with this action. I understand the immediate need, but how long do these plants take to grow? Some of the pillow plants we were walking on take a century to grow, what about the bushes? Will they survive after we have taken their branches? Why do these need to die for us to make it up a muddy road?

Eventually all four trucks made it through the second mud patch.

The third mud patch might have been our match. The first truck made it through, but barely, and the second became stuck. There were no bushes on the sides of the road at this point, so we were at a loss. It started to rain. While I wanted to help, I didn't have rain gear, so went up to the first truck and sat in the truck while the other trucks were pushed / pulled / prodded through. Eventually the first truck pulled the second truck out of the mud, we loaded up into the two vehicles only, down from four, packing everyone and all the gear in, and were on our way.

At this point, it was 12:10. We were 2 hours past our expected arrival time. And this is how adventures go.. We have our plans, and Nature has hers. I talked with Juliana about it, trying in some small way to assuage her stress. These are the times that become stories. 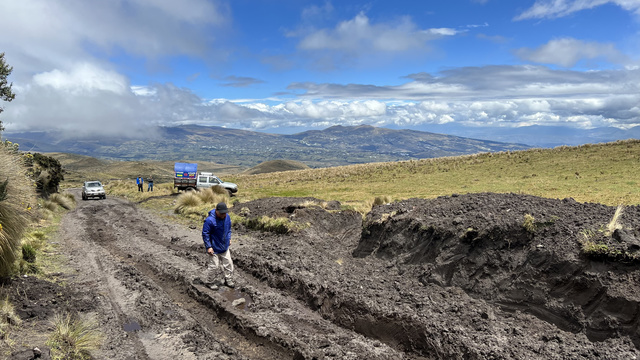 Ten minutes later, we were stuck in a new mud patch. This one we just went around. I also realized that Ramiro was riding along in the back of the truck, and I was completely WTF, trying to figure out whose lap I could sit on so that he would have a seat belt.

As we were going up, the road went from cobble stones to hard pack dirt to mud to hard packed dirt to more dirt to stones to a creek down the middle of the road to just fucking rocks. We were 4x4ing up this mountain road. We were 4x4ing, complete with harmonic frequencies. I was in the front passenger seat, so I had a lovely view of what was coming up, and what was going on to the downward side of the road. In the Live Maim Die scenario, we had a 100% die off the right side of the road. My anxiety completely spiked, even as I tried to calm myself.

Back in February of 2018, Jonathan and I took a (very lovely) trip to Hawaii. We went to the Big Island, because I wanted to both show him Hawaii and show him the places Mom and I had visited when we were there. On that trip, Jonathan and I took a helicopter flight over the lava fields. The flight was amazing, the pilot willing to fly low for great views. On that flight, I heard a high pitch whine, and was wondering what part of the helicopter would make that particular sound. It took me a couple minutes to realize that the high pitch sound I was hearing was actually a scream, and that scream was coming from me. 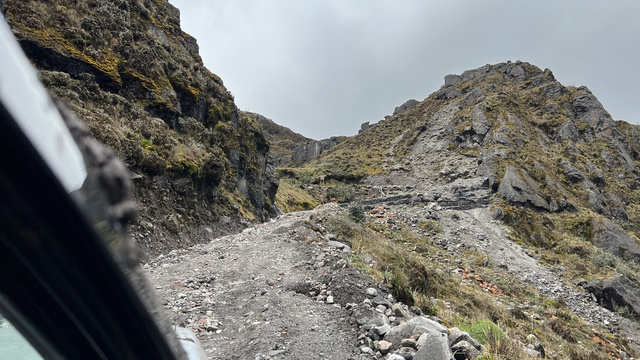 I felt the same way on the way up on this drive. The realization that we are going to drive down this road, and back up tomorrow does not make me feel great.

Eventually we arrivred at the end of the road. Not at the hut, oh no, the end of the road. We all climbed out of the trucks and geared up for the hike to the hut. I moved as fast as I could and was still behind everyone. I am unsure what I'm doing wrong that I am consistently the slowest in gearing up. This was my first time wearing my rented boots, which was a mistake, I realize. I tied them tight. They are still loose.

I was the last one to the hut, arriving around 13:20. Quelle surprise on being last. 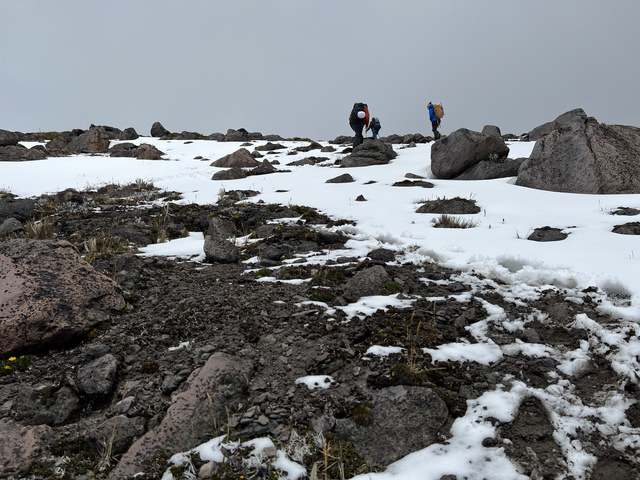