My fourth of n watercolors of Neko Harbor, poorly lit. The image below was taken with the paint still wet, so the colors are different here than with the painting dry. 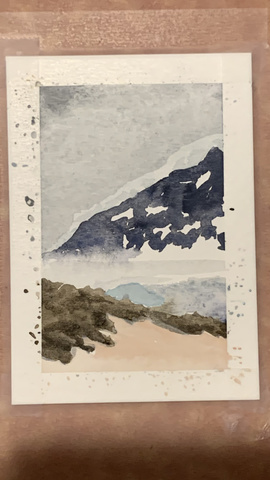 I started this one while on a call with Dad. He was talking. He's a Hodsden: when he manages a head of steam, he'll be talking for a more than a bit. Lord knows, I inherited that quality from him. Since he'd be talking for a while, I settled down at the table where I had my paints set up, and started painting. About half way through, he called me out on it. "You're distracted," he said. So, I explained to him what I was doing, and sent over the picture of Neko Harbour and my first two attempts. I sent over a picture of my in-progress picture, then received a lecture on how to learn to paint well. Dad said I should pick one technique and become very very good at it before moving on to the next technique. I countered, or try many, many, many variations of the same image and learn something new on every painting, because, let's be real: I don't need a mansplaining on how to paint from someone who has never tried to paint anything smaller than a house. I did laugh with Dad about it, when he admitted that no, he doesn't know how to paint, and that my suggestion was likely as good ( :\ ) as his.