Home » Blogs » kitt's blog
Low on Chocolate« an older post
a newer one »Contradictory Facts to the Stories We Tell Ourselves
Blog kitt decided around 10:27 on 24 May 2019 to publish this:

So, how am I doing on that pushup goal that I set last September, of being able to do those 50 pushups in a row by June. Originally, I was doing 5 sets of knee pushups to failure, resting for 3 minutes between sets. Eventually, I managed around 40 on the first set, dropping to 32 on the fifth set, and I hated every session. Motivating myself to do the pushups became harder and harder. Eventually, my numbers started dropping, and I started skipping days.

On a whim, in a joke channel at (no longer current) work, I asked my coworkers earlier this year, "I'm working on 50 pushups in a row by June. I'm stalling out at 22 in a row. Any training techniques recommended to get me past this plateau?"

The first response was "Check your macros, brah, probably not getting enough protein."

Yeah, so, my 40g of protein a day was not going to get me to 50 pushups in a row. I bumped up my protein intake to 80g, but still short of the recommended 120g a day to build muscle.

That was one change. Pushups still HURT, but they are doable. Good call, Zach.

[Aaaaaaaand in retrospect, the "brah" REALLY should have clued me in that I WAS working in a tech-bro culture and that cliques are still strong in companies, even those that claim to have "great culture." Hint: if you have to declare you have great workplace culture, you might not for those not (male and white), and I'd argue even for some of them.]

Another recommendation was to start using rings to do angled ring pull ups, to counter balance the pushing motion. I bought the rings, carried them along with me to San Francisco and Phoenix, and haven't used them yet.

The last recommendation that has changed my [pushup] world was from Jonathan Abra:

Good morning, I just stumbled into your question in training about the push ups. When I tried to get to as many as possible I found two things that were really useful: force yourself to breath, that is the biggest obstacle to repetition and the other thing is to break it down to sets in order to overload the muscles: do 6*5 with 1 min in between or an ascending series with 1 min in between starting at 5 then 6... I got to 120 so I can say it worked well for me. I did those sets 3 times a day but I think building up to it is key to not hurting yourself.

I started with three sets of six rounds of one pushup with a minute between each set of each one. That lasted a day, and I was up to two pushups per round the next day. These are full pushups, not the knee pushups, which is a huge difference. Anyone who says that knee pushups lead to full pushups is lying, they don't translate well at all. I was going 150 knee pushups daily and still couldn't do more than 15 full pushups in a row.

Okay, how many do I need to build up to?

The point is to get to 50 (or even 70 to be safe) anyway, even with breaks because it means the muscle will be able to take the workload and from there its a question of reducing time between sets or the number of reps in each set (but keep the total)

So, I started building up to 6 rounds of 10 pushups in a row, with a minute break between.

I was up to six sets of seven pushups done three times a day. 126 pushups a day! Whoo!

I mean, LOOK at this bar: 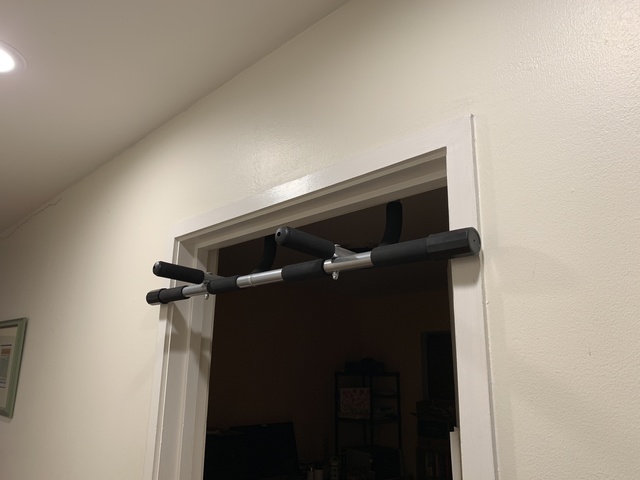 How can you walk by and NOT want to try a chin up?

When I tried, I ended up pulling my left lat along the bottom. I refused to believe it, I mean WHO PULLS CHEST MUSCLES?

Which meant the only right solution was to stop doing pushups and letting my body heal.

I thought two weeks would be enough. After two weeks, a single pushup hurt in a not-good hurt. I wasn't sore, I was injured. So, I was wrong about those two weeks, and stopped doing any pushups again. I kept stretching, but did no pushups in April.

I'm now back up to my second day of six sets of 5 pushups, done three times a day. My pecs are starting to grow again, and my lat is starting to complain. Instead of bumping up every week, I'll likely go up after ten to 14 days instead, which means I'll miss my June deadline, but might make a revised September goal. I'll be okay with that. 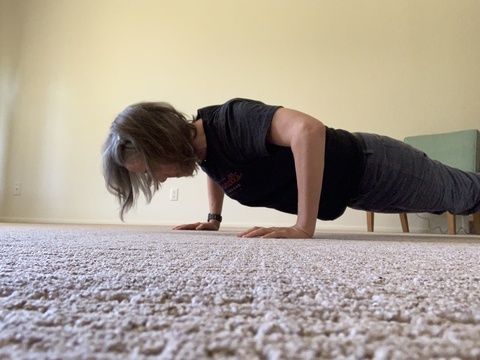 I, too, mentioned the protein

I, too, mentioned the protein. You need that protein to help build muscle.