Nerve Damage« an older post
a newer one »Across Five Aprils
Book Notes Instead of being asleep at 10:14 on 7 June 2020, kitt created this: 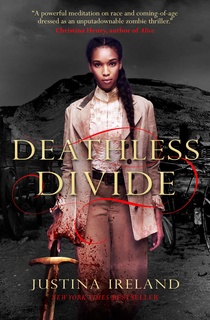 While reading The Killer Angels, I found myself in a fit of "gosh, I want to read fiction right now." I had enjoyed reading Dread Nation, and recalled a sequel was coming out. That thought, along with the so f'ing long overdue recognition of racial inequality in this country, meant reading this book next was a no-brainer.

And it is so very much worth reading, recommended with delight.

Yes, there are zombies in it. Yes, there is heartbreak in it. No, there isn't a happy ending. Yes, there are many, many social commentary digs at both being a woman, and being black. And yes, there were black people in the Wild Wild West, which was a comment that Ireland makes in the author note at the end of the book, though you wouldn't know it from most of the other western fiction books out there.

This book follows immediately after Dread Nation, with Jane, Katherine, and a number of other Summerland residents fleeing the zombie hoard that broke out in town. What we learn in this tale, which alternates between Jane's and Katherine's perspectives (a style I enjoyed very much), is that Gideon Carr, the rich white boy from the previous book, has a significant part to play in this tale, and that one needs friendships (a lot).

As learned in The War for Kindness, fiction is a gateway drug into empathy. I feel this book does a gentle introduction into the crap a woman deals with as second class citizens, and barely starts to introduce the worse crap non-white people have dealt with in this country.

While I recommend this book more than I recommended Dread Nation, the first is needed to understand this one. Read them in order, if you decide to read them.

Adventure is only swell so long as a body is enjoying the trip. After that, it becomes an ordeal.
Location: 85

And even if I do not understand the pain she feels right now, it does not mean I cannot support her through it. That is what friends do.
Location: 377

“You can’t help but get involved in things, even when you know better. How can I depend on a woman who finds it appropriate to run off into the fire instead of away from it? It’s who you are, Jane, and I’ve always loved that about you. But while that may be admirable in a Miss Preston’s girl, it ain’t in a wife. I want someone I know is going to be there, day after day, not off running on some adventure.” “Why is that okay for you and not me? Why is it okay for a man to be out running around and not a woman?” Jackson shakes his head. “I ain’t saying it’s fair, but that’s the kind of woman I want.
Location: 545

He shakes his head, and I can’t help but feel that in all our time together I didn’t know him like I thought I did, not really. He doesn’t want a wife. He wants a doormat.
Location: 552

move.” I force myself deep, deep down into the place in my mind where everything is quiet and cold and my heart ain’t breaking. Luckily it ain’t as hard as a body would think. How does one go on when they’ve lost their heart? By being heartless.
Location: 825

He gives me a polite smile, one that I suppose is meant to be reassuring. Men have been giving me that smile my entire life. I do not return it.
Location: 1,604

I take a deep breath and let it out. There is no use in yelling at a grown woman about her life choices, even if they are poor.
Location: 1,795

As Eve got to the part where the ghost led her through the dark woods and west to something like freedom, Aunt Aggie shook her head. “Sometimes, when the world doesn’t make sense, it’s easier to pretend like there are other forces at work. But there ain’t. That’s just life.”
Location: 1,938

“There ain’t any kind of inoculation against fear and false confidence.”
Location: 2,026

lap. I suppose when lines are drawn it is easier to go with what one knows than to forge new paths.
Location: 2,072

I’ve been living so long for the future that I haven’t been focusing on the now. And I ain’t sure I know how to change that.
Location: 2,294

I was scared, so I stayed.” He shakes his head. “I should have run like my friends, but I didn’t.” I nod, because I understand that feeling. Sometimes it can feel like the unknown is worse than the hardships you’re enduring.
Location: 2,320

“Betsy was a hero,” I say. “Exactly,” Redfern says, nodding. “Heroes die. But survivors live to tell the story. When the dead got to be too much for us to handle, most of those fools wanted to keep fighting, because that’s what we’d been taught. I was one of the first to cut and run. I knew what the score was. The things you’re taught are only useful if they keep you alive.”
Location: 2,344

“It’s the American way,” she would say, watching from the porch as another family took up residence at Rose Hill. “You help as much as you can—but no more. You don’t think those founding fathers wrote all those pretty words about independence just to help the poor, do you? The books are right there in the library, Jane. They did it because they didn’t want to pay taxes, to have some king tell them the price of tea. And for that, they went to war, and hundreds of people died.
Location: 2,353

In a world that is morally gray, I somehow still believe in right and wrong.
Location: 3,079

I laugh, because that is what you do when a man says something ridiculous.
Location: 3,090

An ache blossoms in my chest, and I pick up my untouched glass of whiskey and drain it. The liquid tastes as smoky as my memories and burns all the way down. It feels like penance. That is the real reason I do not drink too often: I am afraid that if I find my way to the bottle I will be lost forever.
Location: 3,101

Don’t let San Francisco fool you. It might seem pretty, but it’s been built on the same volatile mixture of greed and exclusion as the rest of this country.
Location: 3,411

But more important, it makes me wonder: How can we make the world a better place if we are always at odds with one another for every single kind of reason under the sun?
Location: 3,436

Unlike so much else in our lives, it felt . . . easy. I guess falling for someone always is. It’s the staying in love that’s hard.
Location: 3,599

I cannot help but remember the way she had never hesitated to call out some random bit of unfairness or chicanery. (As long as it was not her own, of course.) There is something admirable about being willing to stand up against injustice and name the devil true.
Location: 3,756

I consider telling them about the feelings between me and Callie, how close we’d grown over the past year, but I decide not to. Some things just ain’t for the telling, and even though Callie is gone, I want to keep the memory of our time together for myself.
Location: 4,528

face. I know this is a sin, but there are few things I enjoy more than being right.
Location: 5,274

And that is that. Sometimes the people we love fiercest leave the world like a whisper.
Location: 5,957