Anne of Green Gables« an older post
a newer one »One Day We'll All Be Dead And None Of This Will Matter
Book Notes Posted by kitt at 10:18 on 20 November 2017 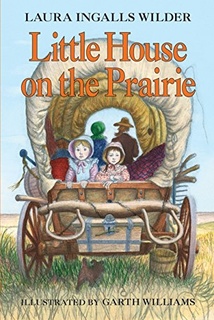 I continue my reading of the children classics by checking this one out of the library, as I didn't believe this is a book I'm going to want to keep, and reading it. Which is what happened.

I read the book. I enjoyed the book for the most part, though my reading of the book was completely and totally colored by my childhood watching of the Little House On The Prarie series. Laura was totally Gilbert as I read. I found this realization a bit disappointing, as I prefer to have my own impressions of the characters when reading.

The blinding hatred of Native Americans in the book threw me off more than a little. Even as the Ingalls build their homestead on Indian land, both historically and by treaty, they complain about the Indians invading their home. Gee, look, you're f'ing stealing theirs completely. I was annoyed by that part.

I enjoyed the book for the most part. I'm a bit intrigued by the idea of the lost skills demonstrated by Pa in the book, but I'm not reading any more in the series, I didn't enjoy them that much. This book itself is book three in the series, so I already skipped a bunch.

Checking another classic off my fill-in-the-gaps reading goal.

Pa said he wouldn’t have done such a thing to Jack, not for a million dollars. If he’d known how that creek would rise when they were in midstream, he would never have let Jack try to swim it. “But that can’t be helped now,” he said.
Page 26

Pa kept pouring more hot water into the tub in which Ma’s foot was soaking. Her foot was red from the heat and the puffed ankle began to turn purple. Ma took her foot out of the water and bound strips of rag tightly around and around the ankle.

She could not get her shoe on. But she tied more rags around her foot, and she hobbled on it. She got supper as usual, only a little more slowly. But Pa said she could not help to build the house until her ankle was well.
Page 61

I read with interest the previous recommendations for a sprained / crushed ankle. Used to be, heat was the solution. Now, it is very much RICE: rest, ice, compression, and elevation. They had the compression right, but not the ice part.

When Carrie felt the beads on her neck, she grabbed at them. She was so little that she did not know any better than to break the string. So Ma untied it, and she put the beads away until Carrie should be old enough to wear them. And often after that Laura thought of those pretty beads and she was still naughty enough to want her beads for herself.
Page 181

Worse, to make a little girl feel bad for wanting something.

Laura was not really crying. She was too big to cry. Only one tear ran out of each eye and her throat choked up, but that was not crying. She hid her face against Ma and hung on to her tight. She was so glad the fire had not hurt Ma.
Page 204

Even the 10 year olds are Stoics!

“We could get along all right, if I didn’t,” said Pa. “There’s no need of running to town all the time, for every little thing. I have smoked better tobacco than that stuff Scott raised back in Indiana, but it will do. I’ll raise some next summer and pay him back. I wish I hadn’t borrowed those nails from Edwards.”

“You did borrow them, Charles,” Ma replied. “And as for the tobacco, you don’t like borrowing any more than I do. We need more quinine. I’ve been sparing with the cornmeal, but it’s almost gone and so is the sugar. You could find a bee - tree, but there’s no cornmeal tree to be found, so far as I know, and we’ll raise no corn till next year. A little salt pork would taste good, too, after all this wild game. And, Charles, I’d like to write to the folks in Wisconsin. If you mail a letter now, they can write this winter, and then we can hear from them next spring.”
Page 206

No sense wishing for things or that your actions were different, they are what they are, deal with it. Every interaction in this book oozes the classic stop-complaining-and-do-what-needs-be-doing attitude. I wish people were more like this today.