Originals« an older post
a newer one »Coping Skills
Book Notes kitt decided around 18:39 on 23 February 2019 to publish this: 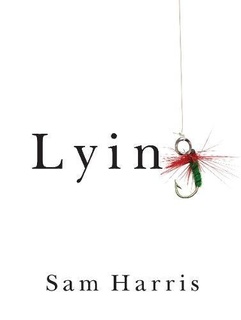 This book came onto my radar from one of the books I've read in the last month or so, referenced in some way, I don't recall how. It was available at the library, so I borrowed it, and read it.

This book is a short, intense, and powerful read. Half of the book is the essay, the second half is an interview with Harris and his influencer professor, Ron Howard and a question-answer format exploration and reader challenges about not lying.

Again, a short, intense, and powerful read. It is amazing, it could change your life if you listen. Maybe not as much as Harris' life was changed by his professor, but maybe as much.

I finished reading it, set it down, and felt a huge release. Did I really need someone far away to tell me to tell the truth, even down to stop telling the small white lies? I want to shrug and say, "I don't know, maybe," but the answer is yes, very clearly yes. Am I embarrassed by that? Yep, sure am! Am I finally listening to myself, too? Yep, sure am!

The book is a quick read, an essay book that I wouldn't have counted as a "book" last year in my book count. This year, if it's a book, it's a book, even if it's not what I historically have called "a real book." I bought myself a hardback copy of the book when I found the opportunity at a local bookstore, the book is that good and worth having. It is amazing, let me buy you a copy.

To lie is to intentionally mislead others when they expect honest communication.
Location 66

To speak truthfully is to accurately represent one’s beliefs. But candor offers no assurance that one’s beliefs about the world are true.
Location 72

[T]ruthfulness require that one speak the whole truth, because communicating every fact on a given topic is almost never useful or even possible.
Location 73

Honesty is a gift we can give to others. It is also a source of power and an engine of simplicity.
Location 111

You can be honest and kind, because your purpose in telling the truth is not to offend people. You simply want them to have the information you have and would want to have if you were in their shoes.
Location 115

Holding one’s tongue, or steering a conversation toward topics of relative safety, is not the same as lying (nor does it require that one deny the truth in the future).
Location 125

Honesty can force any dysfunction in your life to the surface.
Location 126

Lying is the lifeblood of addiction. If we have no recourse to lies, our lives can unravel only so far without others’ noticing.
Location 128

Telling the truth can also reveal ways in which we want to grow but haven’t.
Location 130

Doing something requires energy, and most morally salient actions are associated with conscious intent. Failing to do something can arise purely by circumstance and requires energy to rectify.
Location 138

And although we imagine that we tell certain lies out of compassion for others, it is rarely difficult to spot the damage we do in the process.
Location 182

A white lie is simply a denial of these realities. It is a refusal to offer honest guidance in a storm. Even on so touchy a subject, lying seems a clear failure of friendship.
Location 207

In many circumstances in life, false encouragement can be very costly to another person.
Location 210

False encouragement is a kind of theft: It steals time, energy, and motivation that a person could put toward some other purpose.
Location 214

This is not to say that we are always correct in our judgments of other people. And honesty demands that we communicate any uncertainty we may feel about the relevance of our own opinions.
Location 215

If the truth itself is painful to tell, often background truths are not—and these can be communicated as well, deepening the friendship.
Location 218

[W]hen asked for an honest opinion, we do our friends no favors by pretending not to notice flaws in their work, especially when those who are not their friends are bound to notice the same flaws. Sparing others disappointment and embarrassment is a great kindness.
Location 293

A commitment to honesty does not necessarily require that we disclose facts about ourselves that we would prefer to keep private.
Location 301

The truth could well be “I’d rather not say.”
Location 302

To agree to keep a secret is to assume a burden. At a minimum, one must remember what one is not supposed to talk about.
Location 305

In those circumstances where we deem it obviously necessary to lie, we have generally determined that the person to be deceived is both dangerous and unreachable by any recourse to the truth. In other words, we have judged the prospects of establishing a genuine relationship with him to be nonexistent.
Location 336

This is among the many corrosive effects of unjust laws: They tempt peaceful and (otherwise) honest people to lie so as to avoid being punished for behavior that is ethically blameless.
Location 380

When you tell the truth, you have nothing to keep track of. The world itself becomes your memory, and if questions arise, you can always point others back to it.
Location 388

Integrity consists of many things, but it generally requires us to avoid behavior that readily leads to shame or remorse.
Location 403

To lie is to erect a boundary between the truth we are living and the perception others have of us. The temptation to do this is often born of an understanding that others will disapprove of our behavior. Often,
Location 405

Big lies have led many people to reflexively distrust those in positions of authority.
Location 425

We seem to be predisposed to remember statements as true even after they have been disconfirmed.
Location 437

Justified government deception is a kind of ethical mirage: Just when you think you’re reaching it, the facts usually suggest otherwise.
Location 448

The ethics of war and espionage are the ethics of emergency—and are, therefore, necessarily limited in scope.
Location 455

Lying is, almost by definition, a refusal to cooperate with others. It condenses a lack of trust and trustworthiness into a single act. It is both a failure of understanding and an unwillingness to be understood. To lie is to recoil from relationship.
Location 460

It seems that there are situations in which one must admit at the outset that one is not in the presence of an ethical intelligence that can be reasoned with.
Location 505

If someone is trying to kill me, I’m going to use the minimum effective force necessary to stop him.
Location 524

This one, I'm not so sure, and is a place of cognitive dissonance and moral dilemma for me. If someone is trying to kill me, and I do not use all effective force to stop him, he has the opportunity to try to kill me again. Surviving isn't a guaranteed better place to be. There's a scene in The Fall that sticks with me. In it, the murderer is raping a woman and her brother attempt to save her, but without an intention to kill the murderer, only to disable. As a result, the murderer recovers and kills them both. The circumstance is fictional. And yet, human nature.

But let’s face it, there are people who are up to no good in all kinds of ways. I’m not going to abet them in violating other people’s right to be left alone, and I’ll do whatever is necessary to avoid that.
Location 529

That’s life. It doesn’t all have a Hollywood ending. There are lots of pluses and minuses. Ultimately, we all die, and the only question is, what have you done between the time you’re born and the time you die?
Location 558

But we have to put a frame around the relevant facts of the present, and if a person hasn’t been perfectly ethical up until yesterday, he has to figure out how to live with the legacy of his misbehavior.
Location 587

He could say, “We’ve never talked about this. Is this something you really want to talk about today?” This may be the time, whatever their beliefs about what happens after death. Or he could say, “Look, we’ve got a very short time together, and whatever we’ve done in the past, if it doesn’t bring us joy now, let’s leave it behind.”
Location 599

Howard: I look at it another way: No matter how much time I’ve got left, I want to live a life that I have no regrets about.
Location 606

Do you view your life in terms of relationships or transactions? If you’re bidding on eBay, truth isn’t an issue. That is a completely transactional situation. If I’m dealing with my mechanic on an ongoing basis, it’s not a transaction. It’s a relationship, and he will make judgments about me and about my reliability as a person. And I will make judgments about him, and these judgments will have long-term effects for both of us. This alters the prisoner’s dilemma: If you have a relationship with a person, you’re going to have different beliefs about the prospect of his selling you out than you would if he were just some guy the experimenters grabbed and put in the situation with you.
Location 674

When your model of yourself in the world is at odds with how you actually are in the world, you are going to keep bumping into things.
Location 692

That’s why I want a very strong system to deter maxim-breakers based on restitution. In other words, some of these things you do are imposing costs on everyone else. I’ve never been burglarized, but I’m paying the price for people who commit burglary, through insurance and other costs. If you engage in that sort of behavior, you ought to pay the overhead for it.
Location 757

Insofar as it is possible, our justice system should oblige criminals to repay their debts to society rather than pointlessly suffer on account of them.
Location 760

Children have fantasy lives so rich and combustible that rigging them with lies is like putting a propeller on a rocket.
Location 799

[I]s the last child in class who still believes in Santa really grateful to have his first lesson in epistemology meted out by his fellow six-year-olds?
Location 800

There is a tension between avoiding danger and resisting evil—and how we resolve it will depend on many factors.
Location 826

A prison is perhaps the easiest place to see the power of bad incentives.
Location 851

As someone who has sat for many print interviews, I can attest to the insidious way that one’s vanity and trust may work to one’s disadvantage.
Location 877

Nevertheless, one must begin being truthful from wherever one happens to be in life.
Location 951

given a sufficiently hostile environment, lying will be the least of one’s problems. If a person is likely to be killed for his beliefs, misrepresenting them would be an ethical means of self-defense.
Location 1012