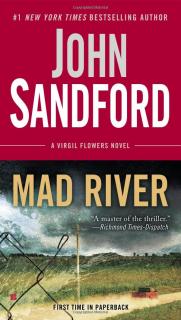 Okay, this Virgil Flowers book is not a mystery at all. From the first paragraph, we have the villains' names and their actions. We don't know exactly why they are doing what they are doing, but we know who they are and what they are doing. So, no mystery with a big reveal at the end about the bad things, just one giant action scene.

Eh, that accurately describes it, one long car chase.

Which isn't a bad thing. I remember reading Gerald's Game years ago and thinking, "Okay, King is a good author if he's able to make the story of a woman hand-cuffed to a bed for two days an interesting story." I had a similar reaction here, in that, okay, it's a 6 hour car chase by Virgil Flowers of three relatively dim-witted small-town teenagers (with a note in the book that half the population is dumber than average, which isn't necessarily true unless there is an evenly mirrored distribution of intelligence about a reflection point at the average, which there isn't, and also a discussion way off point here, but the note is in the book. Now, if we were talking median instead of average...), and, yet, it is still interesting.

Best to read that previous sentence without the content between the parentheses.

So, yeah, we have a 400 page car chase and a crap tonne of murders. Not the usual one maybe two (okay, four) that seem to be in every Flowers book. We start off with five and it gets worse from there. Of course the book's back cover tells us this, which is why, after someone has already recommended a book to me, I don't read the two sentence summaries on book jackets. Too often, they ruin the book.

And back to this book. Hey, Flowers isn't perfect. He doesn't always win. He's good, a statistical anomaly to be sure, but even he both makes mistakes and fails. We finally see this in this book.

There is a bit of a mystery in the book. I enjoyed it, and managed to read it starting at 11pm last night until 4am. No idea why I kept reading and wasn't tired. Was a fun ride.

Recommended. The whole series is recommended so far.