Oryx and Crake« an older post
a newer one »Tilt-A-Whirl
Book Notes Written with a loving hand by kitt some time around 17:39 on 18 November 2016 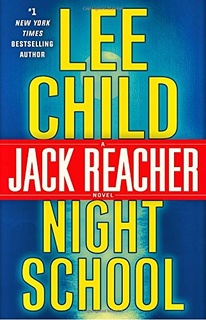 Okay, the latest in the Jack Reacher series, this one is a throw back to the mid-nineties, a filler story in the Reacher history. A great thing about this book is that we learn about Reacher, but we also learn about Neagley, which is also a great thing.

The basic plot of the book is that the various intelligence agencies hear about a $100,000,000 deal, want to know what it is, and, realistically, stop it as anything that big being done in secret is going to be bad news. Not knowing the item for sale makes tracking the deal difficult.

What I like about the book is that Reacher doesn't follow a straight path. He misses the bad guy left and right, walking right by, seeing and not seeing him. Of course, Reacher gets the girl. I know, shock.

What I didn't like about the book is this complete and utter bunk "science" that Child tries to pass off:

And best of all, the linear measurement between the bruises on the victim’s buttocks and on her elbows was self-evidently the precise distance between the sharp base of the assailant’s pelvic girdle and his kneecaps. Which after standard deductions for the joints in question gave the precise length of his femur. And the length of the femur was considered an infallible guide to a person’s height.

"And the length of the femur was considered an infallible guide to a person’s height." What a bunch of bullshit. I have a femur right here that you can't tell my height from. Hell, if you use that femur, I am 5' tall, and you'd be off by a lot.

“Do you love your country, Mr. Reacher?” “Major Reacher.” “Perhaps that answers my question.” “I prefer to think of it as healthy yet skeptical respect.” “Not very patriotic.” “Exactly patriotic. My country, right or wrong. Which means nothing, unless you admit your country is wrong sometimes. Loving a country that was right all the time would be common sense, not patriotism.”

The ending of the book was INCREDIBLY RELEVANT to the United States in a post 2016 election. The climax was, wow, yes. Reacher's choice. The right one. So relevant.

Again, recommend the Reacher series. Not all at once, but fun reads in pieces.