Kindred« an older post
a newer one »A Killer Harvest
Book Notes Written with a loving hand by kitt some time around 19:37 on 6 December 2018 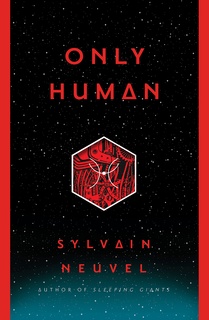 The book starts nine after the last one ended, with a dead robot left on Earth now working, Americans terrorizing everyone under the guise of "freedom," and our four intrepid heros returning from Esat Ekt. The storyline also folds back to immediately after our four Earth heros landed on Esat Ekt and are not allowed to leave, so we learn their history and why they left when when weren't really allowed to leave.

It's easy to see where Neuval was going with this particular book: he talks about us versus them and repressed populations and people being held against their will, stopped from leaving by a bureaucratic government and power-seeking people. The parallels to modern western culture and its direction are almost punched into the reader's face.

With Kara gone, however, the sass of the conversations are gone, too. Which makes the book less interesting. There isn't discovery and adventure, there's the tedium of life and the mundane. Both of which, sure, exist and are important, but not when I'm reading a young adult science fiction books about aliens and giant robots and the like.

And really, if it is so easy to recreate a person, memories, soul and all, why wasn't Kara xeroxed in this way and updated regularly?

— One more for the good guys. Spreading freedom, one city at a time.
— I’m fairly certain they had freedom before.
— Well, now they have more.
Page 6

I don’t care what happens to my “soul.” I don’t care if there’s still a me, but I really want for there to be a you. The world makes more sense if there’s a you.
Page 44

Believe me, my standards as a single parent are about as low as they can be. She didn’t come with a manual, but if there is one, I’m pretty sure there’s a bit in it about not stranding your child on another planet, dying in front of her, letting her deal with your body.
Page 44

What was that thing Wittgenstein said? Something about a man imprisoned in an unlocked room because it doesn’t occur to him to pull instead of pushing on the door.
Page 44

— We can learn so much from these people, use the time we have to understand how their society works.
— What’s the point if we can’t tell anyone?
— Do you really mean that, Vincent? That doesn’t sound like you at all.
Page 74

I wish they’d make the best of whatever time we have here. We all see the same things, but I wish they could see them as I do. I feel like I’m enjoying a movie no one else in the room is paying attention to.
Page 77

You don’t wanna think about bad shit, so you pretend it doesn’t exist? Reality doesn’t give a crap whether you pay attention to it or not. It’s still there.
Page 137

— Goddammit! Listen to what I’m saying! I don’t wanna be saved! I don’t want you to do anything because I don’t want their stupid cure.
— I’m not gonna let you die.
— I don’t need your permission, son. I’m a general. I’m tired of this place. I’m tired, period. I’m seventy-one years old. I’m allowed.
— …
— What? You think I’m sorry to go? You think I have a bucket list I want to get through after all this?
— You don’t want to go home?
Page 144

My hatred of "gonna" and "wanna" burns with the heat of a thousand suns.

There are ZERO WAYS a General of the Armed Forces of The F'ing Planet Earth is going to say, "gonna" and "wanna" instead of "going to" and "want to."

This was as bad as a Puero Rican girl raised by a South American general, a French Canadian scientist, and an American woman sounding like she is a Jewish girl from the Bronx, as the audio book does.

Couldn't listen to that shit.

— I’m sorry, sir.
— Sorry for what? Are you apologizing to me because you can’t cure cancer? Or because you can’t make the world the way I want it to be? Either way, never be sorry about things you have no control over. You’ll just give yourself ulcers.
Page 145

These people can’t even do racist right. I hate this world. People are small. They’re ignorant, and they’re happy to stay that way. They make an effort to. They’ll spend time and energy finding ways not to learn things just to feel comfortable with their beliefs.
Page 152

Anyone who can beat up a cook can get out! But they’re not. They’re all staying here. Basically, they don’t need the fence or the guards. They can just tell people to stay, and they stay. Stay! There, good boy!
Page 167

I asked him why people complained about politics all the time but did absolutely nothing about it. I couldn’t understand why people keep voting for the very people they loathe. They’ll protest a war, but the everyday stuff, small injustices, they just let them slide. Friends making a fortune off government contracts, paying a hundred dollars for a pencil, that type of thing, people complain about it, everyone does, but they won’t do a thing. I remember how floored I was when he told me that was a good thing, how we need a certain level of cynicism for society to function properly. If people thought they had real power to change things, if they truly believed in democracy, everyone would take to the streets, advocate, militate for everything. It happens from time to time.
Page 167

If you see something wrong with the world, fix it. Fight. Resist. Don’t use cardboard.
Page 168

"On the planet? You can’t defeat terrorism on a whole planet, it’s not an army you can crush. That’s why it’s called terrorism. There’d always be one person left somewhere to blow up more things."
Page 229

— I had a feeling you’d go back to old habits right away.
— Am I that predictable?
— Well, yes. Everyone is. I’d do the same thing. Old shoes, old shirt, a familiar meal. For a moment, the world makes sense again.
Page 232

"You’re being too hard on people, just like you can be too hard on yourself. People got scared. Rightly so! What happened here nine years ago wasn’t anyone’s fault. It just happened. People have the right to be emotional, and irrational, from time to time."
Page 233

Just not at the level of Cheetoh, btw.

"We’ve lost our collective mind! Scientists are ignoring their own findings. People are denying even the most basic scientific facts because it makes them feel better about hurting each other. Do you realize how horrifying that is? We’re talking about human beings making a conscious effort, going out of their way, to be ignorant. Willfully stupid. They’re proud of it. They take pride in idiocy. There’s not even an attempt to rationalize things anymore."
Page 233

Oh, hey, the commentary isn't opaque AT ALL here.

You can’t expect babies to do the things adults do. You can’t expect anyone to do things they can’t do. If you ask me to lift five hundred pounds, I can’t. It doesn’t matter how much I want to, how much conviction I put into it. It’s just not something I can do.
Page 235

Our late friend once told me: “redefine alterity and you can erase boundaries.”
Page 237

If you’re using bombs instead of words, that means you’re banking on people giving you what you want out of fear instead of reason. That’s never a good sign.
Page 265