The Ghost Map« an older post
a newer one »The Wish List
Book Notes Written with a loving hand by kitt some time around 13:53 on 7 April 2020 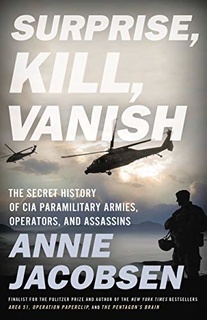 This book wasn't recommended, per se, by MNS, but it was his current read, and I appreciated his recommendation of Call Sign Chaos, so picked up the book.

The one sentence summary of the book, "It is a history of the CIA," sums up the book perfectly.

Is it an impartial history of the CIA? No idea.

Is it a complete history of the CIA? Not by a long shot.

Is it a good read? Absolutely.

I enjoyed reading the book, cringed at parts of history where the CIA either chose or executed poorly, and appreciated the parts where the CIA did well. Many parts of the book were annoying in the arrogance of the agents, and frustrating in the need for the agency's actions. People. Here we are.

I'd recommend this book for anyone who enjoys history books. This appears to be a good overview of its history (again, it can't be a complete history, just a public one). One can appreciate modern history books, given most high school history education ends sometime around World War Two.

Killing a leader or prominent person at the behest of the president is legal under Title 50 of the U.S. Code.
Location: 122

The CIA did not create the Latin American propensity for assassination. Long before the Central Intelligence Agency existed, targeting killing was a well-established political tool throughout the region. These were the rules of the game for authoritarian regimes that ruled by force and corruption, not laws.
Location: 999

Those pronounced guilty were lined up against the prison wall and executed by firing squad. In the days that followed the revolution, more than one hundred and fifty pro-Batista Cubans were shot dead. When asked by the foreign press about the summary executions, Che fired back, “To send men to the firing squad, judicial proof is unnecessary.” Besides, he said, the concept of justice was a hypocritical creation of Western capitalists. “These procedures are an archaic bourgeois detail,” Che insisted, “this is a revolution.… A revolutionary must become a cold killing machine, motivated by pure hate.”
Location: 1,655

Further news was repressed, not surprising given Che Guevara’s views of the press. “Newspapers are instruments of the oligarchy,” he told the Cuban people. “We must eliminate all newspapers; we cannot make a revolution with free press.”
Location: 1,824

The flight attendants began to serve lunch, Merletti recalls. “They put a meal in front of me and then they said to Mike, ‘We’ll get you a meal in a minute.’” Five or so minutes passed before the flight attendant returned. “She says, ‘We’re really sorry, but we don’t have any meals left. But here’s a little voucher so the next time you fly, you’ll get an upgrade or something like that.’” Mike Kuropas looked at the voucher. “He looks at me,” remembers Merletti, “and he says, ‘You know this is a bad omen,’ and I say, ‘What do you mean?’ He says, ‘I’m not coming back.’ I say, ‘Mike, don’t say that. Don’t say that at all.’ I said, ‘You know, we all have those thoughts, but don’t go there, just don’t do it.’” Mike Kuropas looked squarely at Lew Merletti and said, “No, I know I’m not coming back.
Location: 2,781

“Standing there, I became overwhelmed with emotion,” he recalls. “The reality set in. I thought about Mike and I still think about all the guys who died in Vietnam. Each one of them. They were alive one moment and then they got shot. There’s no anesthesia on the battlefield. You get shot. It’s incredibly painful to get shot. You bleed out before you die,” Merletti says. Standing in front of Mike Kuropas’s name, Merletti made a vow. “I wanted to try to live up to certain expectations of myself, for him. For Mike.” Merletti vowed that moving forward in his life, were he to perceive something in front of himself as difficult, he would stop and think of Mike Kuropas. He would acknowledge that whatever problem he was having, he was having the problem because he was alive. Mike Kuropas would not have the luxury of problems. Mike Kuropas, age just twenty-two, was dead.
Location: 2,862

When, in 1973, Qaddafi learned of a coup being plotted against him, his grip tightened. He created a militia “to protect the revolution” and began a systematic purge of the educated class. Death squads terrorized the population. Political parties were outlawed. Under the draconian Law 75, dissent became illegal. The state took control of the press. There were no legal codes or a legal system; justice was arbitrary.
Location: 3,273

In the early days of the Iran-Iraq war, thousands of these young children were sent to their deaths by the ayatollah as suicide bombers—ordered to clear land mines with their own bodies so as to make way for Iranian infantry troops and advance Iran’s front line into Iraq. Years later, New York Times reporter Terence Smith interviewed survivors of these human-wave assaults, and learned of frightened Iranian children being drugged with an opiate drink called “martyr’s syrup,” bound together in groups of twenty with machine guns at their back, ordered to keep moving forward, to walk to their deaths. Across their child-sized uniforms a message had been stenciled: “I have the special permission of the Imam to enter heaven.
Location: 3,683

With bin Laden were a group of friends and colleagues, Afghan mujahedin. This group had spent the past decade fighting Russian infantry forces following the Soviet Union’s invasion of Afghanistan in 1979. It was a classic irregular-warfare scenario. A much smaller rebel force, the mujahedin, had managed to defeat one of the largest armies in the world, the Russians, using guerrilla warfare tactics. Training, weapons, and funding for the mujahedin came from the United States, Saudi Arabia, England, Pakistan, and China. In 1989 the Russians left, defeated. At the CIA, analysts called it Russia’s Vietnam.
Location: 3,824

To Lew Merletti’s eye, presidential protection was contingent on three fundamentals that never changed. The world is a dangerous place; it doesn’t matter who’s to blame, only that you defend against it; the U.S. Secret Service must never appear weak. An attack could come from anywhere, including a lone wolf, a terrorist organization, or a foreign government.
Location: 4,177

The pretense of virtue attached to killing someone from a distance is curious. Perhaps dangerous as well. The current laws of war prohibit treacherous killing, and that includes assassination. It is also considered treacherous to shoot the enemy while he is taking a bath. But covert action occurs in the in-between, governed by Title 50 of the national-security code. It is undertaken at the behest of the president and is to remain hidden from the public eye. Do the laws of war need to be updated for guerrilla warfare, seeing as it is the only kind of war America has engaged in since World War II? Can terrorism be defeated by gentleman’s rules? War is wicked, violent, and treacherous. A horror of chaos, anarchy, and revenge.
Location: 4,676

talented and courageous.” The discrepancy in opinion between the covert-action operators on the ground and the top brass at the CIA is puzzling. According to Faddis, “Washington wanted the Iraqi Jedburgh story.” What they got “was an unmitigated disaster.
Location: 5,256

“Assassination,” said Hayden, is defined as forbidden lethal acts “against political enemies.” Terrorists are not political leaders. They do not run sovereign states. “U. S. targeted killings against Al-Qaeda are against members of an opposing armed enemy force,” Hayden clarified. “This is war. This [targeted killing of Mugniyah] is under the laws of armed conflict.”
Location: 5,466

The Taliban government that boasted piety, incorruptibility, and bravery left behind in its wake one of the most immoral, corrupt, criminal, debauched societies the modern world has ever
Location: 5,606

known. Civil order had been destroyed. “Adults [left] traumatized and brutalized,” writes Pakistani journalist Ahmed Rashid, in Taliban. “Children rootless without identity or reason to live except to fight.” In the words of Lakhdar Brahimi, a former United Nations diplomat, “We are dealing with a failed state which looks like an infected wound. You don’t even know where to begin cleaning it.”
Location: 5,607

Just war theory tells us not to rejoice in the battlefield deaths of others; that there is no place for vengeance or bloodlust. But what is man, if not flawed?
Location: 6,017

Obama succeeded in making Americans comfortable with drone strikes,” says former administration official and drone scholar Micah Zenko, “as they are generally supported by the American public and wildly popular in Congress.” There is subtext here: if Congress can’t fight a battle on political lines, it acts as if it is not a battle worth fighting for. How did we end up here, with assassination—but not called assassination—normalized, mechanized, and industrialized?
Location: 6,021

One day in the summer of 1928, war became outlawed. Representatives of fifteen nations led by the United States and France gathered inside the French Foreign Ministry in Paris and signed a pact declaring war illegal. The General Treaty for Renunciation of War as an Instrument of National Policy, or the Kellogg-Briand Pact, came a decade after World War I, considered the war to end all wars.
Location: 6,025

The closest the world ever came to nuclear war was during the Cuban missile crisis. It was Che Guevara, more so than Fidel Castro, who advocated for nuclear war. “If the people [of Cuba] should disappear from the face of the earth because an atomic war is unleashed in their names,” Che told the First Latin American Youth Congress in 1960, “they will feel completely happy and fulfilled.” This rhetoric likely contributed to President Johnson’s granting the CIA the authority to oversee Che’s killing.
Location: 6,176