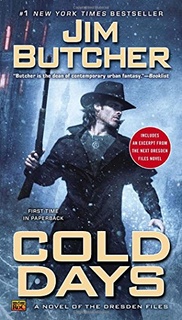 While this isn't in the top three of my favorite Dresden books (those all have Harry thinking about past actions, about life and the choices one makes, and about maturing during those reflections), this is a good, action-packed Harry Dresden book.

I enjoyed it the first time I read it. And the second. And the third. I'm unsure what the count is for this read, but it is at least the fourth read. Yay Butcher.

Aspects I really like about the book revolve around Demonreach and Kris Kringle (I mean, hello, Dresden has freaking Santa Claus on his side, how cool is that?). The major aspect I didn't like about the book is the lack of reset on Harry's powers. I mean, think about it, he died. Before he died he was becoming more and more and more powerful. He was already the sixth strongest wizard alive in the first book, at this point, with his growing into his power and other wizards dying off, he's probably closer to the top spot (but isn't, hello, Merlin). Dying could be a huge reset button, allowing more growth.

But that's not how it is. Instead, he's still mighty powerful, and still attracting even more powerful enemies, and, well, isn't that how Dresden likes it, poking his finger in the eye of the enemy?

Definite read is you're a Dresden fan. Marsters narration is amazing, if you like audio books.

“Sometimes I think that’s where most of us are,” I said. “Fighting off the crazy as best we can. Trying to become something better than we were. It’s that second bit that’s important.”
Location: 2,264

I missed my dog. I missed the familiarity of having a place that I knew, that was a shelter.

I missed my life.

I’d been away from home for what felt like a very long time.
Location: 2,420

I understand this very much.

“I know the world seems dark and ugly sometimes. But there are still good things in it. And good people."
Location: 2,460

So at the end of the day, I really didn’t know what was going to happen to me in the future. Heh. Why should I be any different?
Location: 2,532

“That I was your brother, Harry,” he said. “That I loved you. That I knew a few things about denying the dark parts of your nature. And that we would get through it.” He put his elbows on his knees and rested his forehead on his hands. “That we’d figure it out. That you weren’t alone.”
Location: 2,631

I always thought it would get easier to be a person as I aged. But it just gets more and more complicated.
Location: 2,642

Fire isn’t always an element of destruction. Classical alchemical doctrine teaches that it also has dominion over another province: change. The fire of my tribulations had not simply been pain to be endured. It had been an agent of transformation.
Location: 3,018

“I had this teacher who kept telling me that if I was ever in a fair fight, someone had made a mistake,” she said.
Location: 3,714

I reminded myself that just because someone is courteous, it does not necessarily mean that they aren’t planning to vivisect you. It just means that they’ll ask whether the ropes holding you down are comfortable before they pick up the scalpel.
Location: 3,813

“Maybe you’re right; I don’t know. But until I have a better idea, it’s smarter to keep reminding myself that I don’t know, rather than assuming that I do know, and then translating anything I learn to fit my preconceptions.”
Location: 4,407

“No one just starts giggling and wearing black and signs up to become a villainous monster. How the hell do you think it happens?” She shook her head, her eyes pained. “It happens to people. Just people. They make questionable choices, for what might be very good reasons. They make choice after choice, and none of them is slaughtering roomfuls of saints, or murdering hundreds of baby seals, or rubber-room irrational. But it adds up. And then one day they look around and realize that they’re so far over the line that they can’t remember where it was.”
Location: 5,231

Power corrupts — and the people being corrupted never seem to be aware that it’s happening.
Location: 5,252

"Will you not always be imperfect?”

“I think it’s a cruel world. I think it’s hard to find love. I think we should all be happy when someone manages to do it.”
Location: 5,789

Graves aren’t for the dead. They’re for the loved ones the dead leave behind them. Once those loved ones have gone, once all the lives that have touched the occupant of any given grave had ended, then the grave’s purpose was fulfilled and ended.
Location: 5,876

"Nothing I have to say can possibly make this task any easier for you. The only way to do it is to do it.” He lifted his chin. “You don’t need help, Warden. You are the help.”
Location: 6,482

The only good thing about having your back to the wall is that it makes it really easy to choose which way you’re going to go.
Location: 6,502

Molly rode shotgun with me, holding her backpack on her lap. Molly was a big believer in shaping the future by way of carrying anything you might need in a backpack. Tonight it looked particularly stuffed.
Location: 7,349

But all things wither away eventually.
Location: 7,521

As if some freak who had never loved enough to know loss could tell me about pain.
Location: 7,847

That grain of sand might be the last remnant of what had once been a mountain, but that which it is, it is.
Location: 7,887

But you can’t go around changing your definition of right and wrong (or smart and stupid) just because doing the wrong thing happens to be really convenient. Sometimes it isn’t easy to be sane, smart, and responsible. Sometimes it sucks. Sucks wang. Camel wang. But that doesn’t turn wrong into right or stupid into smart.
Location: 8,208

You never know what you have until it’s gone. Peace and quiet and people I love. Isn’t that what everyone wants?
Location: 8,269

"If the balloon goes up, go after whoever I light up first. After that, improvise.”
Location: 8,380

Learn to fight naked and you can never be disarmed. Which is fine, I guess, as long as there aren’t mosquitoes.
Location: 8,456

“That’s what every conflict sounds like,” he said. “Not everyone can be equally right, Harry.”

“But believe you me, everyone can be equally wrong,”
Location: 8,769

Winter’s nature was beautiful violence, stark clarity, the most feral needs and animal desires and killer instinct pitted against the season of cold and death—the will and desire to fight, to live, even when there was no shelter, no warmth, no respite, no hope, and no help.
Location: 8,883

“Being able to choose to tell lies isn’t a freaking superpower, Maeve,” I said. “Because it means you can always make the wrong choice. It means you can lie to yourself."
Location: 9,272

Sometimes the things that are good for you, in the long run, hurt for a little while when you first get to them.
Location: 9,510