The Late Show« an older post
a newer one »The Phenomenon
Book Notes Instead of being asleep at 13:32 on 17 December 2018, kitt created this: 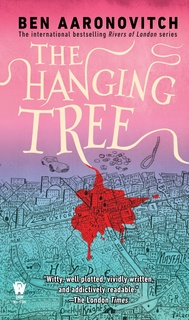 This is book 6 of the Peter Grant series.

This one has Peter tracking down the drugs involved in the death of a teen in an expensive, and empty, unit of One Hyde Park. A child of a river is involved, which said river would prefer not disclosed (doesn't happen). We also learn of another pocket of leftover magic pracitioners, passed down from mother to daughter for generations.

And there's search of the Third Principia, Newton's tome on magic. Oh, and the introduction of Guleed, a female Muslim cop who does just fine.

I will probably read the book again in a few years, and realize why I like this one more than the others. In the meantime, this is a "if you're reading the series, keep reading, this is a fun one."

I recommend the series in general. Start with Midnight Riot.

I waited about a minute, just so I could claim I’d waited five, and then headed back up the garden.
Page 4

Olivia glanced at the picture, then sideways at her mother, and I saw her make the wrong decision. But, before I could say anything, she opened her mouth and stuck her future in it.
Page 18

Guleed always knew how to keep her mouth shut, and had this mad way of just fading into the background whenever she wanted to. Well, we all have our ways of dealing with difficulties — mine is to ask stupid questions.
Page 30

He spoke with that deliberately toned down posh accent that, before they allowed regional dialects on the radio, used to be known as BBC standard.
Page 36

Useful or not, it still had to be written up because a) empirically speaking a negative result is still a result, b) someone cleverer than you might make a connection you missed and c) in the event of a case review it’s sensible to at least look like you’re being competent.
Page 39

That’s the trouble with community policing — strangely, people start expecting you to be part of the community.
Page 44

Melanie who was one of those round perky people who give the impression that it’s only a great effort of will stopping them from bouncing around the room.
Page 44

Beverley said that she found that people stuck the first vaguely appropriate label on, whether it fit the facts or not.
Page 45

“I know it’s hard, Peter,” she’d said. “But if you could contain your erudition and ready wit for just a little while we’d be most grateful.”

That, as they say, is fighting talk. But, as Nightingale once told me during boxing practice, the best blow is the one your opponent doesn’t even notice until he keels over.
Page 54

The word “bollocks” is one of the most beautiful and flexible in the English language. It can be used to express emotional states ranging from ecstatic surprise to weary resignation in the face of inevitable disaster.
Page 57

Either the management were paying them way over the odds, or their HR department had been outsourced to Stepford, Connecticut.
Page 62

I'm pretty sure I've missed over half of them, too.

Generally when you’re interviewing somebody and they seem remarkably calm about one crime, it’s because they’re relieved you haven’t found out about something else.
Page 81

You see, even the clever ones can’t resist being clever and the next move, if you want them to stay being clever, is to play dumb.
Page 81

“Women carried on “practicing”,” said Lady Helena, “just as they carried on composing, painting and all the other professions from which history has erased them. Mother taught daughter, who passed on the skills through the generations — just as women have always had to do."
Page 85

The media always calls this sort of thing senseless, but the motive made sense — it was just stupid, is what it was.
Page 112

This one was a white woman with slate gray eyes which she narrowed at me when I introduced myself.
Page 114

“My father was somebody important right up to the day he was nobody at all,” she said. “Power in the material world is fleeting.”
Page 121

So, back to Mayfair where the constant flow of money keeps the streets clean and free of unsightly poor people.
Page 122

This was off the books — I was not here, this never happened — the spice must flow.
Page 122

Which was totally not my fault, I might add, although I probably shouldn’t have used the word Krynoid in my official report.
Page 153

Though, I have to admit the Doctor Who reference was entertaining in and of itself to me, based on my ongoing and lifelong fascination with crinoids.

Every spare centimeter of the wall space had been covered with shelves, all of which were stuffed with books.
Page 165

The previous summer I’d done the exact same thing while being chased by an invisible unicorn — so at least I had form.
Page 217

Because the alternative is you, I wanted to shout back. But the second lesson on how not to be seen is: Don’t answer back.
Page 220

Sometimes courage is easy, and sometimes you have to scream at your own body to act in its own bloody best interest, and sometimes it refuses the call altogether. And the pisser is that you never know which one it’s going to be until you try.
Page 222

Mercifully it must have been quite late on because it wasn’t the featureless box so favored by the American modernists, and the architect had actually made an attempt to fit it in with the rest of street.
Page 228

“But we are not always the sons our fathers dream of — as you should know.” As I did know, and all the things sons do to make their fathers proud until you learn to choose your own life for your own reasons.
Page 251

Hyde Park Corner is what happens when a bunch of urban planners take one look at the grinding circle of gridlock that surrounds the Arc de Triomphe in Paris and think — that’s what we want for our town.
Page 251

It was full night by the time I crossed the street and the Portland stone of the Arch was bleached white by spotlights, the bronze on top lit up in blue.
Page 252

Once more into the breach, I thought.
Page 257

“If it’s all the same to you, sir, I think I’m going to have to see this through,” she said. “Inshallah.” As God wills it.

“When you’re married you get used to each other — you really only see the person you expect to see.”
Page 288