Working for Bigfoot« an older post
a newer one »A Short Guide to a Happy LIfe
Book Notes Yeah, kitt finished writing this at 10:33 on 21 December 2015 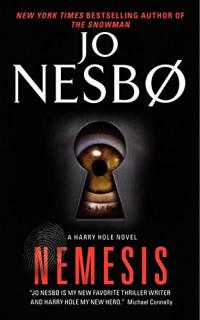 This is book 4 of the Harry Hole series.

Okay, be completely (and by "completely" I mean 100%) unsurprised that the next book I read is a Harry Hole book. It's pretty much all I'm reading these days. So close to 104 books for the year, which would be twice my goal of one book a week. Go me.

This Harry Hole book had the feeling of deja vu. So much so that I had to reread a number of chapters just because I felt I had already read the chapter and wanted to reread it just to confirm that the feeling of "I've totally read this book before" wasn't valid.

In this book, Harry is set up.

And likely about time.

By which I mean, the man has totally set himself up to be screwed by jealous and less moral coworkers.

Tom Waaler is a major character in this book, how he is a complete an total asshole and BAD COP (whoops, spoiler alert). Seriously, if you've been reading this series, that Tom is a bad guy isn't a revelation. He plays an important role in the previous two books. And yeah, he's an asshole. Takes advantage of someone else setting up Harry.