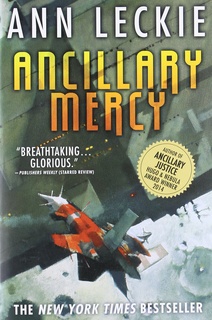 This is book 3 of the Imperial Radch trilogy As such, given how much I enjoyed the last two, and was engaged with the universe Leckie created, I continued with this one (and, let's be real, the next one, too).

Much as the previous two, this book has a society commentary aspect wrapped inside the science-fiction part of the world. In particular, this commentary is about power, the use of power, the corrupting influences of power, and the collateral damage of power. Standing up to power, saying the right thing, doing the right thing, it puts one at a complete disadvantage. One needs to have an entire acceptance of one's small part of this universe, to have acceptance of the meaninglessness of everything, and to have acceptance that, well, this is going to hurt, this standing up for one's ideals.

It's an ugly, nasty mess. Most people lose.

Some become the monsters they fight.

I vaguely recall that Susan and Rob didn't like this book as much as the first. If this is the case, and I am not sure it is the case, I would guess the lack of world building is part of the reduced excitement compared to the first book. This book starts two weeks after the last book ended, so the first book is needed to understand what is happening in this book.

This book doesn't nicely wrap up everything in the book, but it does wrap up some parts of the origins and destinations of some characters. The universe created is definitely one that can linger for a good one or two dozen books. 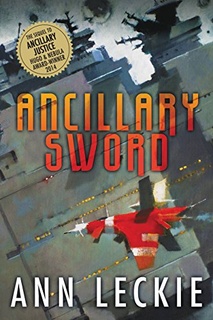 This is book 2 of the Imperial Radch trilogy As such, given how much I enjoyed the last one, and was engaged with the universe Leckie created, I continued with this one (and, let's be real, I'll read the next one, too).

This book starts up a couple weeks after the previous book ended. I like the continuity in the books and the world Leckie created. As with the first book, there is an element of social commentary in the book. The style is reminiscent of Heinlein, actually but a bit more towards the way I think about power and its corrupting power, so perhaps that's why I'm noticing it and paying attention to it in these books.

I love how Leckie weaves the attitudes of privilege into works, but in such a way you know these aren't the "good" people, even if the words you read are words you've heard from your own friends (or own mouth, to be honest).

The plot isn't anything twisty, the universe didn't have any aspects that were new. This book was a continuation of the previous book so much that it could have been a Part 2 of the same book and no one would have blinked (except maybe Leckie, "Write how much in one go? Uh... no." but I'm projecting there).

When I had first met her, a baby lieutenant of seventeen, she hadn’t thought ships’ AIs had any feelings in particular—not any that mattered. And like many Radchaai she assumed that thought and emotion were two easily separable things.
Location 492 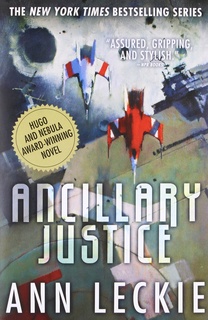 This is book 1 of the Imperial Radch trilogy

Rob Brackett had recently finished the third book of the Imperial Radch trilogy, and raved about it. Given that Susan also spoke highly of the book, I added the book to my library hold queue, which always sets a deadline for "Read before the loan expires!" So, I read this one curled up on my bed at Mom's, giving her alone time as I had my alone time.

This book confused me until I had read enough of the book to understand the world Leckie built. The lack of gendered pronouns is both fantastic (I love the use of "she" instead of our world's default "he" as the gender-neutral pronoun) and confusing (which gender do I imagine this character?). I worked through a large part of the book trying out the opposite gender that I had originally imagined, which was a great treat. Worth trying.

While I was expecting this book to be mostly brain candy, I was delighted (and in hindsight not surprised) by the social commentary in the book. The world has the dominant class (ruling class, aristocracy, privileged class, rich class, oligarchy, victors, call it what you want), which believes that being born into the class makes them by default superior to everyone else.

How familiar. How... human.

The commentary isn't overt, but it is consistent in the book. The book's plot, the plot's action, and the main character's (Breq's) development all pull the reader along quickly, making this an enjoyable read. That it won Hugo and Nebular and Clarke awards just means I'm late to the reading.