Redshirts« an older post
a newer one »Humankind
Book Notes kitt decided around 22:55 on 9 July 2020 to publish this: 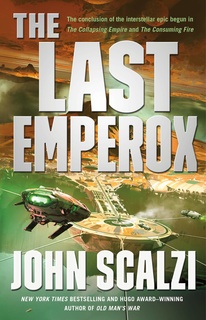 This is book three of Scalzi's Interdepency and much like the first one in the series, I picked up the book and pretty much read it straight through, with a couple pauses to, oh, you know, work and sleep. In reality, after reading Redshirts, I wanted to keep reading Scalzi, despite having several books going already. That's the way it is sometimes.

So, a few things about this book.

3. I absolutely love how many times in this book in particular, a character would stop and, while being upset at something another character said, recognize that the shit thing that came from the other character (words, gestures, advice, the like) was actually fair. Authors often have verbal tics, words or phrases repeated so frequently in a book that they stand out. I don't recall any of Scalzi's other tics offhand, but this one stood out. I liked it. I rather wish more people were able to separate the message from the messenger and appreciate the feedback being given.

So, basic plot: recognition of the end of the current implementation of human civilization, some political maneuvering, many assassinations, a few foreshadowings, a broken heart, and the good guys win in the end.

The series is a fun read and worth reading, a good science-fiction recommendation. Be unsurprised if you throw this book across the room at some point about 3/4 of the way through, then scurry over to pick it back up so that you can finish it.

Senia Fundapellonan was not wrong about Kiva; Kiva was extremely self-interested. Senia thought that was neither good nor bad, but Kiva was of a different mind about that. She thought it was pretty much the only way to be in a universe that didn’t care about anyone’s life one way or another, and in a civilization that was designed to keep the rich as rich as possible and the poor from actively starving so they wouldn’t think to rise up and behead the rich. An uncaring universe and a fundamentally static civilization would smother anyone who didn’t keep themselves and their own concerns front and center.
Page 42

Rules are rules, Robinette said, and dubbed her “Karen.”
Page 61

Marce did not flatter himself into thinking this advantage was a result of his own native ability. There were dozens if not hundreds of Flow physicists more naturally talented than he was,
Page 76

“What I feel is that there is a pattern,” Marce said. “Not a pattern, exactly. But something not random about it, either.”
Page 79

Because people love their patterns.

“I’m not suggesting anything,” Rachela said. “I will note that humans are not great at thinking over the long term, and we were no exception to that. Neither are you, for that matter.”
Page 90

“The families who aren’t here are … sympathetic to your aims. They just want to see which way the wind blows before they commit.”

Nadashe snorted at this. “In other words, they’re cowards.”

The second reason was that the ruling class of the Interdependency, favoring financial and social stability over having the lumpenproletariat trying to rip their heads from their necks at every opportunity, opted to have the Interdependency’s baseline standard of living one where no one starved, or was without shelter, or died of easily preventable diseases or went bankrupt if they had a heart attack or lost a job, or both.
Page 103

They both came away from the meeting feeling like they had manipulated the other precisely, which meant it was a good meeting.
Page 141

"I will say it was a disaster of my own making, which is why I could see it coming from a long way off.”

“If you could see it coming, why couldn’t you avoid it?”

“Because some choices you make, you can’t come back from,” Chenevert said. “And very early on in my reign, when I was pompous and foolish, I made several of those sorts of choices. In rapid succession. Everything proceeded from there."
Page 147

“Looking back on your life and knowing how much better you could have been is never a great feeling."
Page 148

“It’s not a great idea to be too in love with your own cleverness.”

“If I were your mother, I’d use the word ‘fuck’ more often.”

“Sure,” Senia said. “Maybe not as every other word that comes out of your mouth, though.”

“I don’t even hear myself saying it, half the fucking time.”
Page 159

“Did lying ever backfire for you?”

“Telling the truth also backfired for me at times as well, in the times where it might have been kinder, easier or more politic to lie. Lies do not in themselves lead to poor outcomes, nor does truth in every circumstance lead to good ones. As with so many things, context matters.”
Page 174

"Do you know what I plan to do with my body once I am dead?”

Marce and Cardenia might perhaps one day mess up their relationship—people did that, and Marce didn’t delude himself that just because he loved Cardenia it didn’t mean he wouldn’t aggravate the crap out of her sometimes—but they would do it from a state that would encourage constancy and reconciliation as a baseline. Marce was pretty sure he could work with that: every day a new day to start again, building a life together.
Page 266

“I’m not my house. You’ll have to talk to my mother about that.”

“I did. One of my representatives did, anyway.”

Laughed out loud on that one.