Camino Island« an older post
a newer one »The Voyage of the Dawn Treader
Book Notes Instead of being asleep at 20:52 on 14 December 2017, kitt created this: 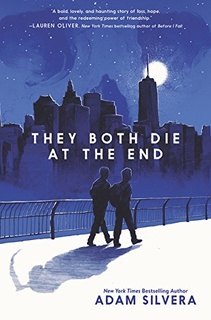 I didn't review this book immediately after reading it. A large reason for this delay is the impact of the book. I recommend this book.

The premise of the book is that on the day someone is going to die, they receive a call from Death Cast, some time after midnight, letting them know they are going to die today. No one escapes death if they are called, you'll be dead by the next midnight. In this world, some people make the death happen. Others try really hard to escape it, only to slip on the floor and die from a concussion anyway. Everyone adapts in some way.

The book is delightfully constructed with the view from a dozen lives that (spoiler, probably) you realize are all intertwined in some way. I really like the vignettes of the smaller characters that dash into the story and step out, but are still very much a part of the tale.

The two main characters meet through an app called Last Friend, a social network for people who have received their calls and people who would like to support people in literally their last day. Of course, some people abuse the network, but most people are there to help. Each of the main characters helps the other find what he needs. That it happens on their last day is heartbreaking. Kinda knew that from the title, though.

I loved that this book isn't about two white boys. Very few of the characters are white male. I enjoyed changing my mental picture of the characters as their descriptions were made. I loved the challenge of rethinking all of my assumptions while reading the book.

I'd like to know if "you're going to die today" means dead-dead or does dead-but-brought-back work? Can you be clinically dead and revived, or is the call dead-dead and you're dead?

Anyway, this book made me cry. I was expecting that. It is an incredible book about death, dying, and living each moment as best you can.

Let me buy you a copy.

Having the chance to say goodbye before you die is an incredible opportunity, but isn’t that time better spent actually living?
Location 396

I’m showering now because I feel guilty for hoping the world, or some part of it beyond Lidia and my dad, will be sad to see me go. Because I refused to live invincibly on all the days I didn’t get an alert, I wasted all those yesterdays and am completely out of tomorrows.
Location 430

But no, I elected for another free period where I could shut down and nap.
Location 465

Life is long when it isn't wasted.

Not perfect, but I’m sure every two people out there — in my school, in this city, on the other side of the world—struggle with dumb and important things, and the closest pairs just find a way to get over them.
Location 703

I’m back in front of my laptop, faced with a greater challenge: the inscription for my headstone in no more than eight words. How do I sum up my life in eight words?
Location 772

No one will look at this photo and think it was out of character, because none of these people know me, and their only expectations of me are to be the person I’m presenting myself as in my profile.
Location 834

Dying sucks, I bet, but getting locked up in prison while life keeps going on without you has gotta be worse.
Location 986

I spent a lot of time feeling guilty for living after I lost my family, but now I can’t beat this weird Decker guilt for dying, knowing I’m leaving this crew behind.
Location 1003

My pops once said goodbyes are “the most possible impossible” ’cause you never wanna say them, but you’d be stupid not to when given the shot.
Location 1024

Have to admit it, I feel a little vindicated in how I’ve lived my life because people can be the worst. It’s hard to have a respectful conversation, let alone make a Last Friend.
Location 1034

Or how this hero known as the People’s Hope receives a message from these Death - Cast - like prophets telling him he’s going to die six days before the final battle where he was the key to victory against the King of All Evil.
Location 1049

It’s mad twisted, but surviving showed me it’s better to be alive wishing I was dead than dying wishing I could live forever.
Location 1185

But no matter what choices we make—solo or together—our finish line remains the same.
Location 1207

No matter how we choose to live, we both die at the end.
Location 1210

Malcolm has never even been in a fight before, even though many paint him to be a violent young man because he’s six feet tall, black, and close to two hundred pounds. Just because he’s built like a wrestler doesn’t mean he’s a criminal.
Location 1258

He’s come straight to my door for my company today, to lead me outside my sanctuary so we can live until we don’t.
Location 1281

"I don’t become fearless just because I know my options are do something and die versus do nothing and still die.”
Location 1330

“It’s going to take a while because evolution is never fast, but the robots are already here."
Location 1455

It’s just that the fear of disappointing others or making a fool of myself always wins.
Location 1491

I’m actually surprised Rufus is chaining his bike to a gate and following me into the hospital.
Location 1492

He once told me that stories can make someone immortal as long as someone else is willing to listen.
Location 1572

I was raised to be honest, but the truth can be complicated. It doesn’t matter if the truth won’t make a mess, sometimes the words don’t come out until you’re alone. Even that’s not guaranteed. Sometimes the truth is a secret you’re keeping from yourself because living a lie is easier.
Location 1601

The same could be said for my other favorite song, “One Song,” from Rent. I’m extra wired, wanting to play it, especially as a Decker, since it’s about wasted opportunities, empty lives, and time dying. My favorite lyric is “One song before I go . . .”
Location 1647

Dad taught me it’s okay to give in to your emotions, but you should fight your way out of the bad ones, too.
Location 1744

“Don’t you have little freak - outs wondering if life was better before Death-Cast?” This question is suffocating.

“Was it better?” Rufus asks. “Maybe. Yes. No. The answer doesn’t matter or change anything. Just let it go, Mateo.”
Location 1800

I’ve spent years living safely to secure a longer life, and look where that’s gotten me. I’m at the finish line, but I never ran the race.
Location 1804

“Getting up means leaving,” I say.

Crossing the street is pretty instinctive at this point. If there are no cars, you go. If there are cars coming toward you, you don’t go—or you go really quickly.
Location 2102

... but Aimee discovered working on herself made her feel more powerful than stealing from others.
Location 2157

“We never act,” Mateo says. “Only react once we realize the clock is ticking.”
Location 2451

I’m already finding that this one day to get everything right isn’t enough. This one life wasn’t enough. I tap headstones, wondering if anyone here has been reincarnated already. Maybe I was one of them. I failed Past Me if so.
Location 2672

Part Three: The Beginning
“That love is a superpower we all have, but it’s not always a superpower I’d be able to control. Especially as I get older. Sometimes it’ll go crazy and I shouldn’t be scared if my power hits someone I’m not expecting it to.”
Location 2895

She never understood how the way she loves could drag such hatred out of others, and she refused to stick around to find the love everyone hated her.
Location 2956

If you’re close enough to a Decker when they die, you won’t be able to put words to anything for the longest time. But few regret spending every possible minute with them while they were still alive.
Location 3462

No matter when it happens, we all have our endings. No one goes on, but what we leave behind keeps us alive for someone else.
Location 3526

And in this moment, how stupid it was to care hits me like a punch to the face. I wasted time and missed fun because I cared about the wrong things.
Location 3536

“What am I going to do without you?” This loaded question is the reason I didn’t want anyone to know I was dying. There are questions I can’t answer. I cannot tell you how you will survive without me. I cannot tell you how to mourn me. I cannot convince you to not feel guilty if you forget the anniversary of my death, or if you realize days or weeks or months have gone by without thinking about me. I just want you to live.
Location 3736